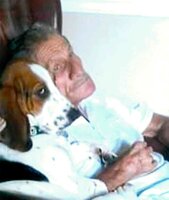 Passed peacefully on December 14, 2021 at the Smiths Falls Hospital at the age of 80 years. Predeceased by his parents Joshua and Edna Evoy (nee Smith), his wife Ola Evoy (nee Rabb), and his brothers Norman, Charlies, Bob, Paul, George, and Richard; as well as his brothers-in-law Roddy, Donnie, Teddy, and Jim MacRae. Garnet will be loved and remembered by his son Garnet Evoy Jr.; his partner Rose Knight, his step-son Neil, and his beloved dog Lilly; his siblings Doug (Helen), Shirley (Jim Lambert), and Jim (Rose); his sisters-in-law Glenna Clark (Tom), Doris Preece, and Darlene Evoy, as well as his brother-in-law Charlie Rabb; and his many nieces and nephews. In his younger years Garnet was well known in the area he grew up in for his hard work on the local farms he served, in his later years he was often seen around the neighbourhood on his scooter. The family would like to thank all of the second floor nurses and doctors at the Smiths Falls Hospital, along with doctors Maziak, Ryan, and Prudhoe for their extraordinary care. The family would like to invite those wishing to attend the graveside service to please do so at Hillcrest Cemetery on Thursday December 30, 2021 at 11:00a.m. If attending, please be sure to adhere to all Public Health Guidelines as described on the Lanark, Leeds & Grenville website. If desired, memorial donations may be made to the Perth & Smiths Falls District Hospital Foundation (specifically the Smiths Falls Site) in Garnet’s memory.