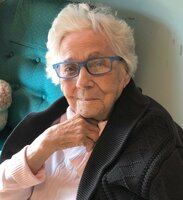 It is with immense sadness that we announce the passing of Laura Ann Palmer (nee Ferguson) on Saturday, September 3, 2022, at the age of 89. She will be sorely missed by her husband, William "Danner" Palmer, her son Paul (Connie) Scott, her daughters Corrine Rizzuto, Deborah (Ron) Mahon, Jacqueline Seal and Kelly Palmer, along with her seven grandchildren and their partners, six great grandchildren and many nieces, nephews, her in-laws and extended family and friends. Laura was predeceased by her parents Roy Samuel Ferguson and Agnes Viola Deslauriers, and brothers Waldron, Ronald and Gerald Ferguson.  We are immensely grateful for the devoted and compassionate care she received by Dr. Marisa Rossi and staff of the Heritage House wing of the Fairview Long Term Care residence in Almonte. Friends and Family are invited to gather at Blair and Son Funeral Home, Smiths Falls on Wednesday, September 7, 2022, from 10 a.m. until the time of the service in the Chapel at 11:30 a.m. Interment to follow At Franktown Public Cemetery.  In memoriam donations to the Alzheimer Society of Lanark, Leeds, Grenville.