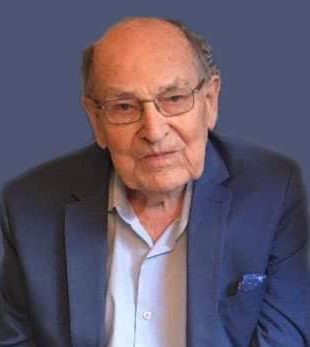 It is with great sadness that we announce the passing of German (Gerry) Huebner on November 30th, 2020.  Gerry passed peacefully with family by his side at his residence in Ottawa.  He was in his 92nd year.

Gerry was born in 1929 in the small village of Kohlbach, Germany, the third of 3 children, born to Bruno Huebner and Maria Huebner.  Bruno was a School Master and Maria was a homemaker.

Gerry was introduced to the art of shoe making by his Uncle at a very young age, and decided that this would be his career - with the intent of taking over the family business.  He passed his shoe making exams in 1948 and then in 1951 entered the School of Shoe Technology to train as a Shoe Designer.  After graduation he honed his skills in Shoe Design working for companies in Dusseldorf, Cologne and Frankfurt.  In 1957 Gerry was eager to sharpen his talents and gain international experience, and therefore immigrated to Toronto, Canada, where he gained employment with Edna Shoe Co.

In 1959 Gerry returned to Germany for an extended vacation to visit family & friends, and was reunited with a wonderful young women who would become his beloved wife of 60 years.  After a short courtship, Alice agreed to join Gerry in Toronto where they were married in May 1960.

In late 1961, Gerry was recruited by the Brown Shoe Co. in Perth as a Shoe Designer.  The plan to return to Germany after 2 years of international design experience rapidly faded.  Gerry & Alice were big city people, but quickly adjusted to the attractions of small town living - including the many dear friends they made in Perth.   Gerry worked at Brown Shoe Co. for 33 years, and made Perth their home for 58 years.  During these years, Gerry delighted in  tending to his large vegetable garden, skiing, socializing with friends, and cottage life where he taught his grandchildren to fish and swim.   After retirement, in addition to cottage life, Gerry joined the gym where he became a celebrity for his charming personality and his 800+ days of consecutive workouts.

Gerry's enthusiasm and zest for life touched all that knew him.  His positive attitude was infectious - "Life is great, every day is wonderful" is the motto he lived by, and he has lovingly passed this adage on to future generations of his family.  We will all strive to live our lives with the same passion.

The Family would like to extend a sincere thank you to Dr. John Saar for his guidance and for the outstanding, attentive care that he provided Gerry. Also, a heartfelt special thank you to the wonderful staff at the Park Place Seniors residence for their support, compassion and kindness during this difficult time.

Donations in memory of Gerry can be made to the Irving Greenberg Family Cancer Centre, 3045 Baseline Road, Nepean www.ottawahospital.on.ca  or a charity of your choosing. Arrangements for services are incomplete at this time and will be announced when available. They have been entrusted to Blair & Son Funeral Directors, Perth.