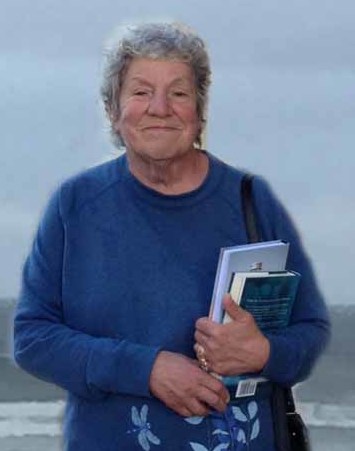 "It began in mystery, and it will end in mystery, but what a savage and beautiful country lies between."
Diane Ackerman
Merilyn Gibson departed this world on Sunday, January 31, due to complications following a series of heart attacks.
The youngest child of Beryl and Harold Leech, Merilyn grew up in Ottawa. With her caring disposition, nursing was a natural vocation and after graduating from the Kingston School of Nursing, as a popular member of its RN Class of 1961, she embarked on a long career in psychiatric nursing in Ottawa, and then later on Vancouver Island.
Merilyn embraced the zeitgeist of the 1970s: The Whole Earth catalogue, macrame plant hangers, a living room that resembled a green house, and home baked carob chip cookies. Her role as earth goddess was evident in her gardens: she had two green thumbs and cultivated flowers, plants, and vegetables. Throughout her life she enjoyed quiet pursuits such as birdwatching, Bible study, reading, cooking, and doting on a succession of pets, particularly her late cat, Phoebe, who was, according to her reports, a genius. She loved classical music, and country music, and everything in between.
She was a seemingly contradictory character with the curiosity of a child and the wisdom of a sage. She was warm and generous and never met a stranger because she approached everyone as a friend. She had a twinkle in her eye, an impish smile, and a quick and keen sense of humor. Merilyn was fiercely loyal and protective of those whom she loved, and she never turned away from someone in need: she would drop everything to lend a supportive ear or hand. She was known to nurse people back to health, or provide comfort in their final days, far into her retirement. Merilyn was uncommonly kind and deeply compassionate. She worked hard to instill these values in her children.
In her last dozen years, she was fortunate to meet Al Harrison, who became a great friend to her. She cherished close friends from nursing school: Carol "Cookie" McCulloch was a loyal friend through the end. In recent years she attended an art class in Lanark, enjoyed as much for the camaraderie and companionship of her fellow students, as for her being able to channel her creative spirit. She was grateful to her friend Bill Walsh for driving her there, especially during the winter months.
Merilyn is predeceased by her devoted husband, Irwin Gibson, who restored her faith in love, and by her brother, Gordon Leech. She is survived by her son, Warren Armstrong (Charlene Lindsay), grandsons James and Ian Armstrong, daughter Ann Armstrong (Kevin Enomoto), sisters Beulah Wadsworth, Evelyn Blakely (Ron), and Myrna Hay, sister-in-law Marilyn Gibson and niece Heather Gibson.
Merilyn had the biggest heart: it is incredibly sad and ironic that, in the end, it was her heart that failed her. While she did not want a celebration of her life; she would smile if you were to raise a glass of red wine in her memory.   In remembrance of Merilyn, contributions to the Canadian Mental Health Association, 151 Slater St., Ottawa, On K1P 5H3 cmha.donordrive.com    Arrangements are in the care of Blair & Son Funeral Directors, Perth.