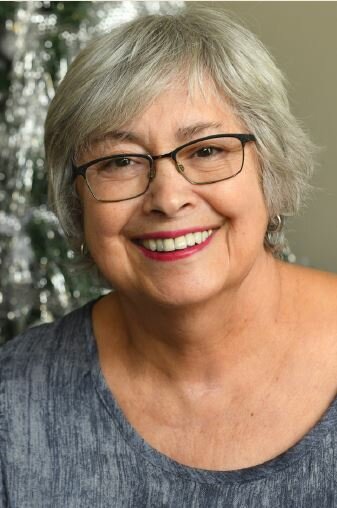 Patricia Lynn Johnson (Petrie)  - Pat was born on January 23, 1948, in Bishop’s Falls, Newfoundland, the daughter of Robert and Charlotte Petrie. Her brother, Robert John Alfred, predeceased her on August 10, 2016. She is survived by brothers, Ian Michael (Joan)  and Neil Douglas (Carol Ann).

In 1964, Pat left Newfoundland to spend 4 years at Acadia University, studying food science. Her roommate for those years, Bonnie Keezer, remains one of Pat’s closest friends. At Acadia, Pat met her life’s partner, Douglas George Johnson, of Hudson, Quebec. 1968 was a memorable year for Pat, who turned 20, graduated from Acadia, and two weeks later, married Doug. Immediately after their wedding, penniless Pat and Doug moved to Ottawa, where Pat had a job working for Agriculture Canada in Biochemical Genetics.

Two years later found Pat and Doug in London, England, where Pat’s job in the Human Genetics section at the University College of London was a source of lifelong pride to her and was a very early step on the road to the development of the Covid vaccine all  these years later! Along the way, - surprise, - Greg (Candice) was born, and the little family returned to Canada. Pat returned to Agriculture Canada. In 1976, Pat took a position at Kemptville College, where she taught sciences for 15 wonderful years, producing baby boy Chris (Emilie) in 1977. She graduated from McGill University in 1986 with a MSc in food Science, then went on to University of Guelph for her PhD work.

The family moved to Guelph in 1991, where Pat took a job as Meat Scientist with Food Inspection, then went on to manage the Meat Inspection Program for several endless years and was then rewarded with funding to develop a whole new food safety program to protect Ontarians, being able to hire talented young staff and implement new ideas. Years of true enjoyment followed until Pat’s official retirement in 2008.

In 2008, Pat and Doug incorporated as Advantage Safety, with food safety and occupational health and safety divisions. They closed their business in 2015 when they moved to Carleton Place to be closer to family and their cottage in Otter Lake, Quebec.

Along the way, Pat was awarded many honours, several at OMAFRA for innovation in science, and the highest award in the Ontario Public Service, The Amethyst Award in 2006. The Ontario Food Protection Association named her as Sanitarian of the Year in 2005, and she was very highly honoured to be made a Lifetime Member of the Ontario Independent Meat Processors that same year.

Pat and Doug were privileged to have three exceptional grandchildren, Olivia Jane, Cooper Gregory and Gabrielle Gracie, of Regina, and could spend hours bragging about their achievements. Just ask.

Pat and Doug enjoyed several fabulous years traveling around the world and have filled many photo books with memories of their travels.