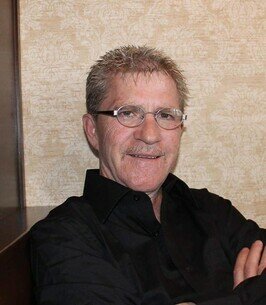 With heavy hearts the family announce the death of Scott Wilson Irvine Jr at the age of 67 years. Scott passed away at Temiskaming Hospital, Friday, July 10, 2020 following a brave battle with cancer.
Born in Smiths Falls, Scott had been a resident of New Liskeard for the past 8 years after having moved from Inuvik. He retired from Fifth Wheel Training Institute in Haileybury. He is survived by his loving wife and companion Celica Facundo, his children: Alecia, Alli, Christina, Dara Anne and Andrew; his step-daughter Cecille; his brothers: Reggie and Kevin; and by his sister-in-law Christe.  Predeceased by his father Scott Wilson Sr., his mother Christina, his sister Twyla Opal and brothers Bernie, John and Raymond.  Mass of Christian Burial will be celebrated at St. Francis de Sales Church, 17 Elmsley St. N., Smiths Falls on Saturday, September 10, 2022 at 11:00 a.m.  Interment, St. Francis de Sales Cemetery.