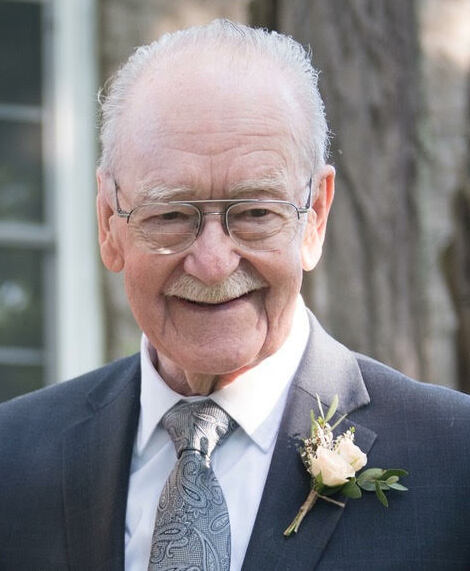 Harvey passed away from heart failure in Perth Hospital on Wednesday, July 27, 2022 at the age of 90 years. His death occurred on the anniversary of his marriage to his life-long love Marian. At the time of Marian's death in 2008, they had been married for 54 years. Harvey was preceded in death by his father, Virdon, his mother, Catherine, and his brother, Ken. He is the loved father of David (Betty), Lorraine (Len), Gordon (Karen) and Victor (Elizabeth), grandfather of Ryan, Lauren (Eric), Shannon (Garritt) and Luke, and great grandfather of Atticus, Beau and Kai. Harvey was born in North Bay and then lived in Noranda, Quebec for the early part of his life.  He received a degree in Metallurgical Engineering from Queen's University in 1953.  He then went on to work at Atlas Steels in Welland and the Steel Company of Canada in Hamilton. While working at Stelco he was a project engineer for construction of the Rod Mill in Hamilton and the lead project engineer for the Nanticoke Steel Mill. In his spare time, Harvey liked to be with family and friends at a self-constructed cottage near Cloyne, Ontario. During his retirement years, he spent much time at dancing and social events in the Kingston and Napanee area. Family and friends will gather at the Blair & Son Funeral Home, 15 Gore St. West, Perth on Saturday September 10, 2022 from 1:00 to 2:00 P.M. A memorial to honour  Harvey's life will be held at 2:00 P.M. with a reception to follow.