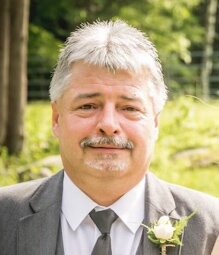 It is with deep sadness that the family of Don Eric Lewis announce his sudden passing at the Perth Hospital on August 11, 2022 at the age of 56.

Don was the cherished father of Stephanie (Jamie) Beamish and Whitney (Josh) Best-Green. He was the proud grandfather of Grady, Darren, Bowen, Ila and Ember. Don is predeceased by his parents Eric and Ila Lewis and his granddaughter Tessa.

Don was a dedicated employee of KHMPC and Quigley & Associates for over 30 years. He will be missed by many friends, co-workers and clients.

In remembrance of Don, donations to Children’s Hospital of Eastern Ontario (CHEO) or the Canadian Cancer Society would be appreciated.